NeoMedia Wins One For the Dark Side

UPDATED 30 Apr 09: Interestingly, this post sat dormant for weeks and just today three new replies came in a flurry. What a coincidence! One talks of how TinyURL infringes on NeoMedia's patent. One is a reply to another commentor. And one, why, one suggests that I have no testicles! At all! Which is true! But rather a mundane fact to point out, and so angrily (also, Jim, water is wet!). And also, things may be "getting legal", yowza! Not sure what that means but it sounds scary, doesn't it? Eek!

Clearly this economy (and swine flu!) is affecting everyone, creepy mouthpieces for random strangers coincidentally interested in NeoMedia's "interests" and barcode bloggers alike.

Like I said, all y'all folks with dogs in this fight: I'd be taking notes and backin 'em up to hard disk if I were you. 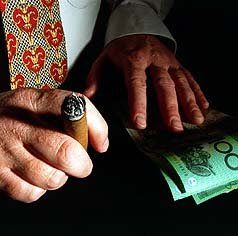 ORIGINAL POST:
After protracted review, the US Patent & Trademark Office recently ruled in favor of evil attorney cabal tech company NeoMedia. For years NeoMedia has argued that they own absolutely everything having to do with barcodes + cellphones, and they own all barcodes + looking them up on the intertubes. They also own a patent on you. And your dog. And your mom.

While the Electronic Frontier Foundation valiantly begged to differ, devoting years and miles of effort, funds and reason to disputing this sort of mercenary dipshittery, it's all over now but the crying.

"Overbroad and invalid patents threaten to chill important innovations, especially for startups and other nascent entrepreneurs. It's important that technology in the public domain stays there." EFF Senior Staff Attorney Jason Schultz said in 2007.

The US PTO has changed all that in one fell swoop of patent validation. NeoMedia can now threaten and actively initiate lawsuits against anyone who creates, uses, promotes or dreams up anything having to do with their special corner of the auto-ID universe. Pay the NeoMedia licensing fee/s now, or pay them after a financially crippling lawsuit- it's entirely up to you!

This means that if you scan a barcode that has a URL in it with an app on your cellphone, NeoMedia may attempt to squeeze cash from every developer in the chain: the maker of the barcode, the cellphone app developer, the cellphone maker, the cellphone carrier, and the owner of the destination internet database. Also, of course, your mom.

This means you, Google. NeoMedia's sure to go after the big guys first, right? Some dude who's running from blog to blog threatening lawsuits sure thinks so. Wonder if NeoMedia knows he's picking fights with some very big dogs on their behalf? Of course he could be NeoMedia's president and CEO for all we know (either way, I'd be making a hard copy or ten of all such blog and forum comments if I were, say, Scanbuy or ShopSavvy or ZXing..).

Whatever happens, it will certainly be interesting to watch. Pop some corn and pull up a chair.